Learn how to make apple pie with this easy apple crumble pie recipe! Made with a coconut oil crust, this delicious recipe happens to be vegan. 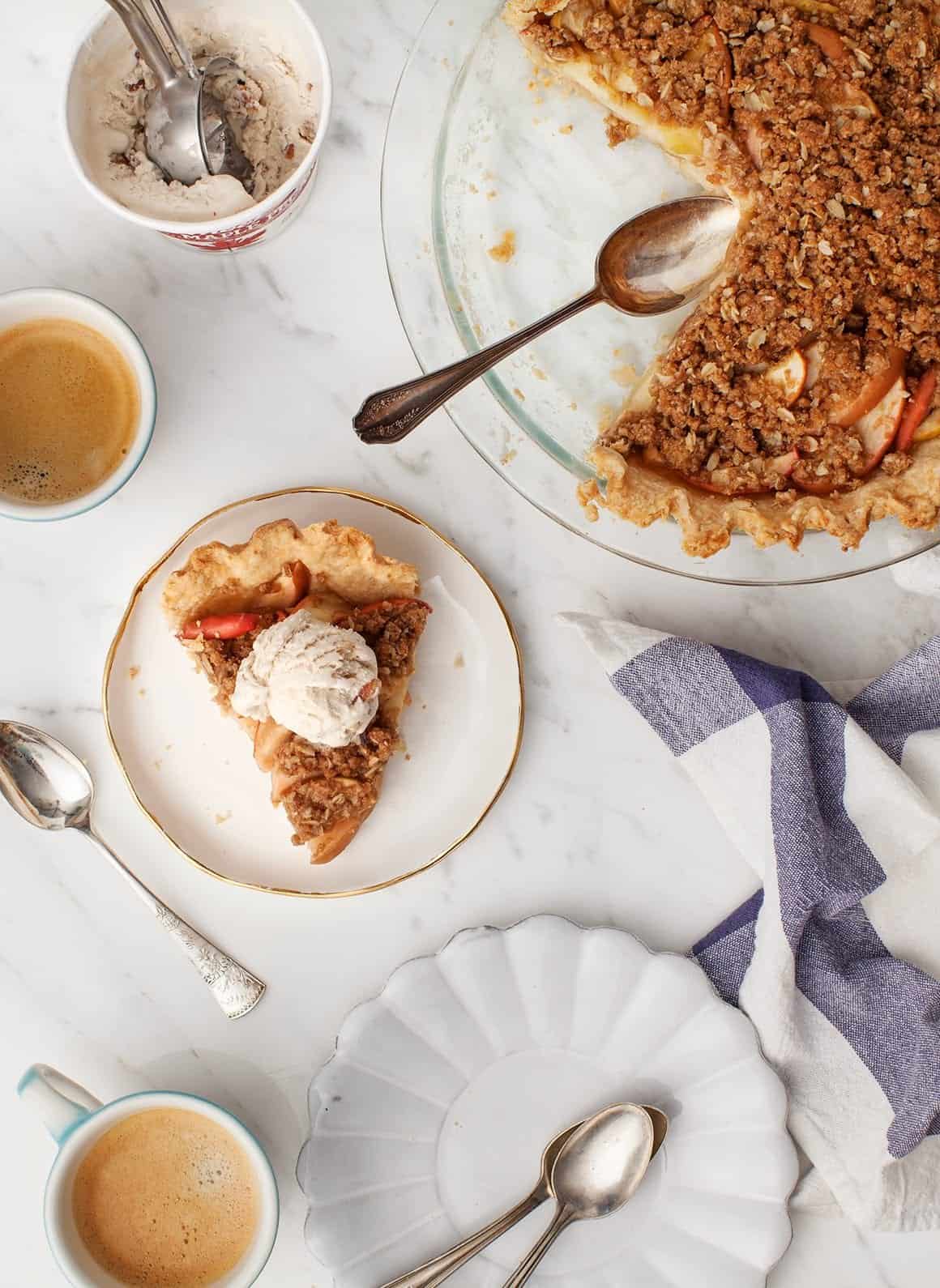 Hi all, this is Jeanine’s husband Jack and, well, it’s fall. We all know what that means… pie! Lots of it.

Pie was a fixture for my holiday meals growing up. My mom made it, my sister made it, I’m pretty sure most of the family made it. There was always more than enough pie to go around. Of course, there was one person who never, ever made pie: me.

It turns out that Jeanine had a similar story – all of the pie she ate was made or brought by other people. This felt like a perfect project for our partnership with Wolf and their Reclaim the Kitchen initiative. The goal of Reclaim the Kitchen is to inspire people through practical meal ideas and tips to get in the kitchen and spend quality time with loved ones by preparing and enjoying food together. What’s fun about this recipe is that we split the pie responsibility in half – I did the crust, she did the filling, and it was great to see both of our hard work come together to make a homemade apple crumble pie from scratch. 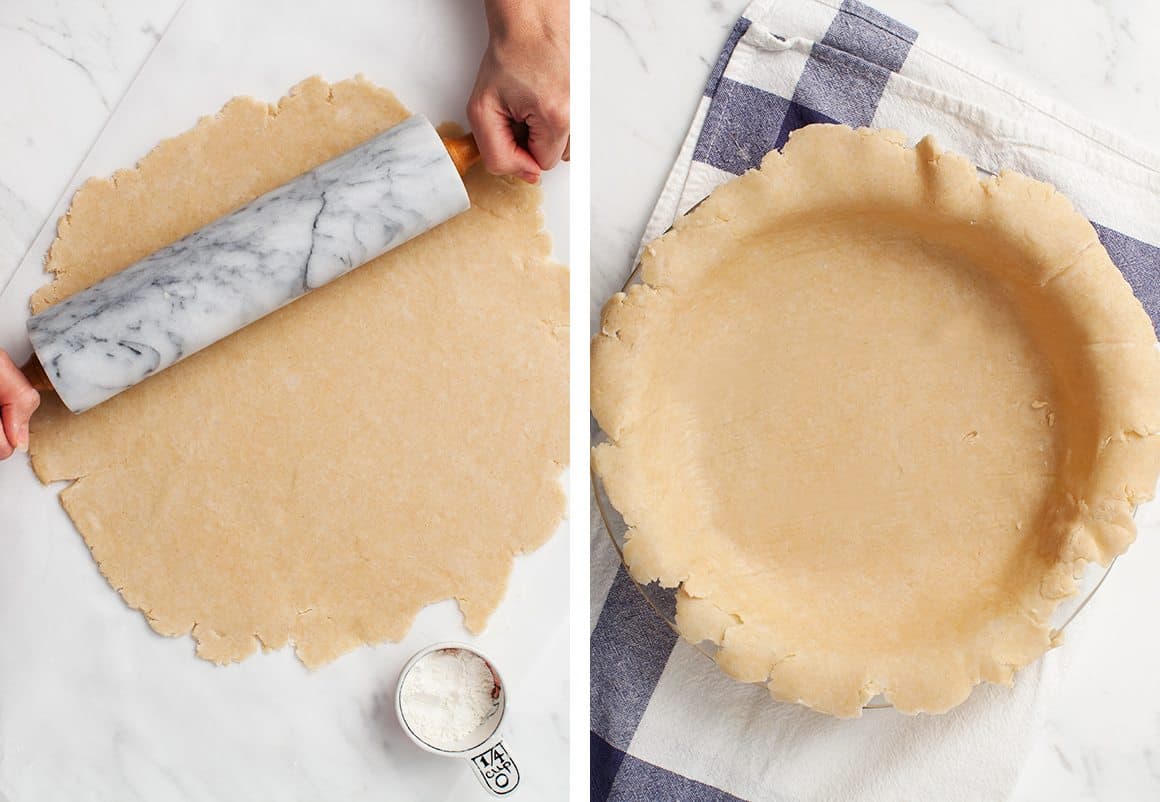 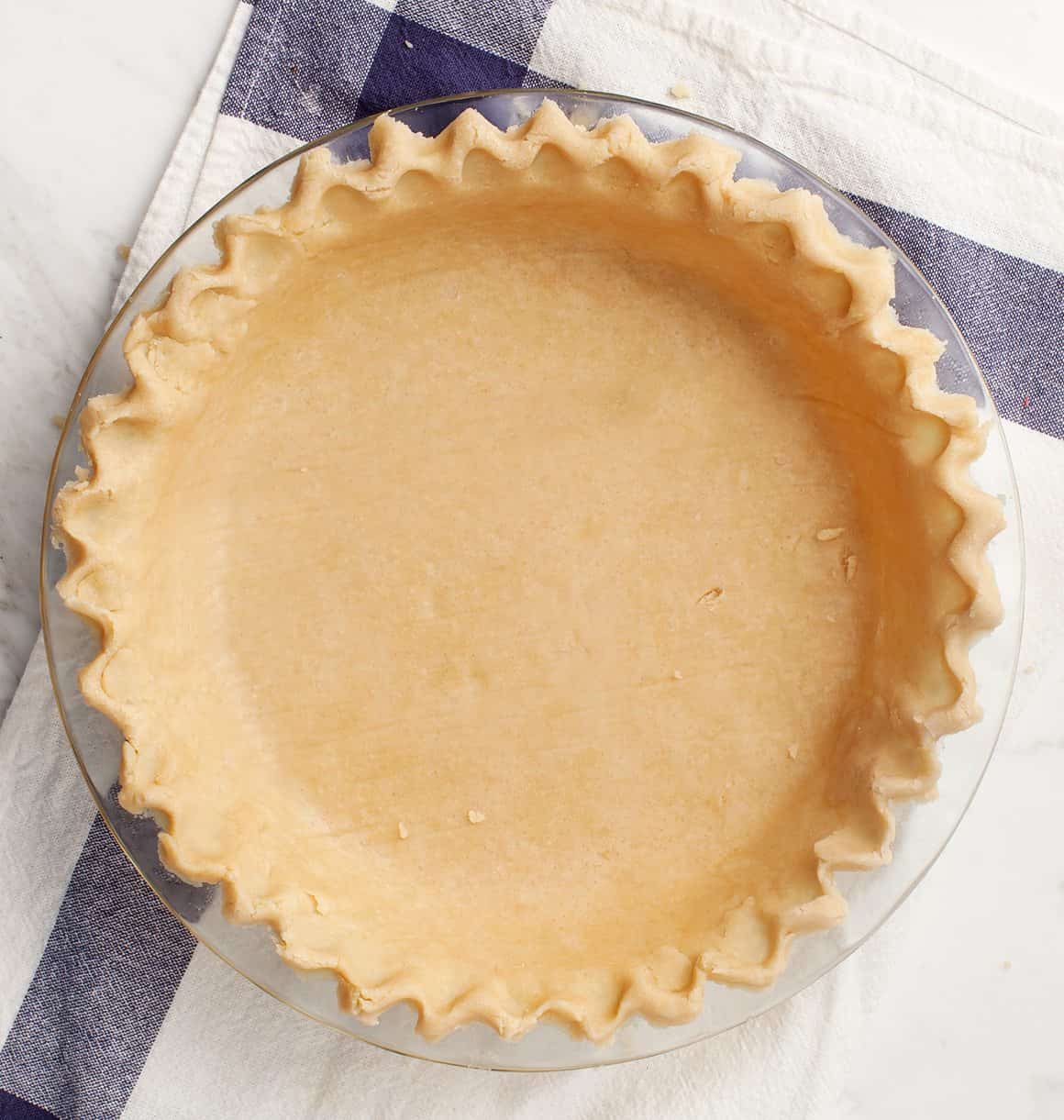 This is a Vegan Apple Pie Recipe!

While pumpkin pie might be more popular at this time of year, Jeanine has a soft spot for soft apples, so our filling choice was quickly decided. As for the crust, we tried a few different versions. We found that we preferred the flakiness of a crust made with coconut oil over butter. Also, to make it a bit more wholesome we opted for half whole-wheat pastry flour and half all-purpose flour. So we somehow stumbled into making a vegan apple pie. 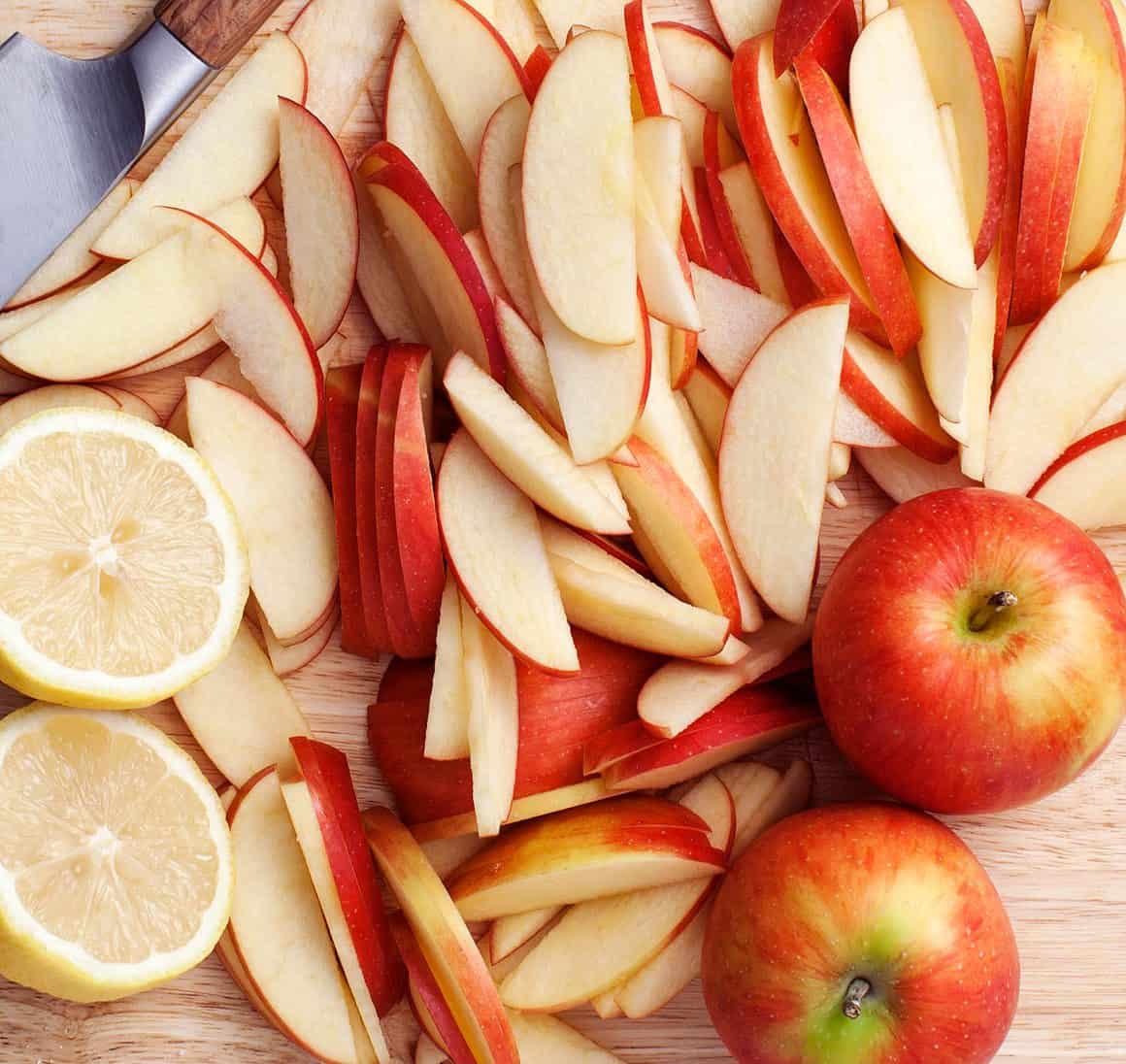 How to Make Apple Pie

We wouldn’t have guessed it, but making apple crumble pie is actually much easier than it looks. The process can be broken down into several main steps:

I have to admit – the crust intimidated me at first. People talk about a lot of things that can ruin a pie crust, and reading pie crust recipes makes it sound like a really stressful experience. Well, it doesn’t have to be. At the end of the day, pie dough is just dough. If (when) there’s a hole or a thin spot, just tear off dough from somewhere else on the crust and patch it up. If (when) you set it in the pie plate and it’s not perfectly centered, just slide it. If (when) there’s a crack, just push the dough together. Thinking about it like this took much of the stress away.

But I do have one major crust-making tip: chill your dough. It’s essential for making a flaky crust that’s easy to work with, so make sure you leave yourself enough time to have your pie crust in the fridge for a full hour before you want to bake it. 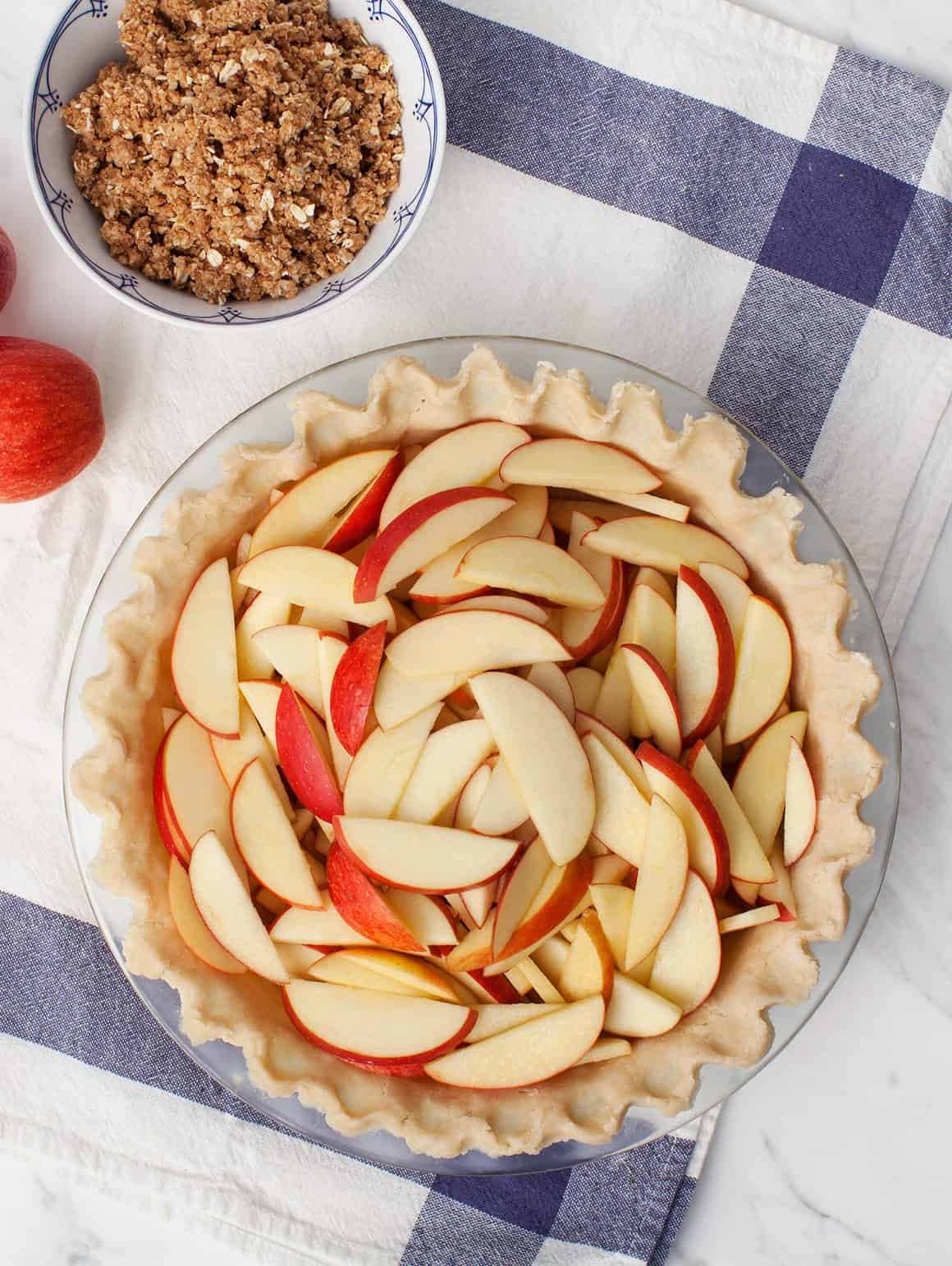 While I was testing out my first pie crust (yes, I baked a pie crust with no pie), Jeanine worked on her filling. She kept it super simple and sliced up a bunch of apples (feel free to peel them if you like) and tossed them with lemon juice, vanilla, and just a bit of maple syrup. Cornstarch is the final filling ingredient – it helps make the apples moist & gooey, but not too watery.

Tip: when you’re making homemade apple pie, the kind of apples you choose matters. Gala and Granny Smith are some of the best apples for apple pie. Not only are they widely available, but they also both have a good firm texture, so they’ll hold their shape as they soften in the filling.

Instead of a top crust, Jeanine made an oat crumble with lots of cinnamon and nutmeg. We loved the sweet, oaty crumb topping over the baked apples, and it also happens to be super easy to make. Simply pulse together flour, oats, brown sugar, salt, cinnamon, nutmeg, and coconut oil in a food processor until a crumbly texture forms. Then, sprinkle it over your apple crumble pie and bake! 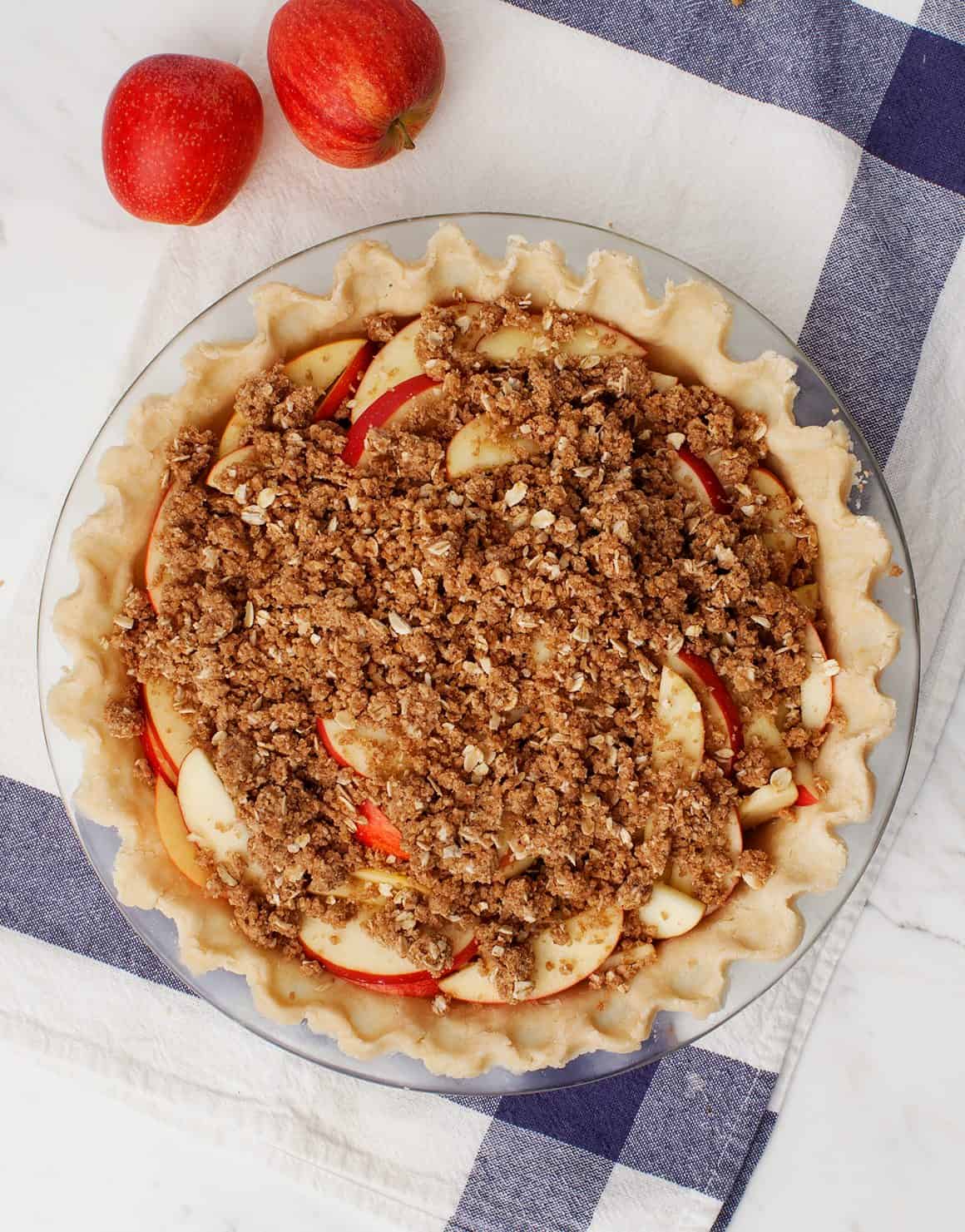 So here you have it – our first homemade blog pie. We highly recommend serving slices of this vegan apple pie with scoops of vanilla ice cream or coconut whipped cream. Thanksgiving here we come! 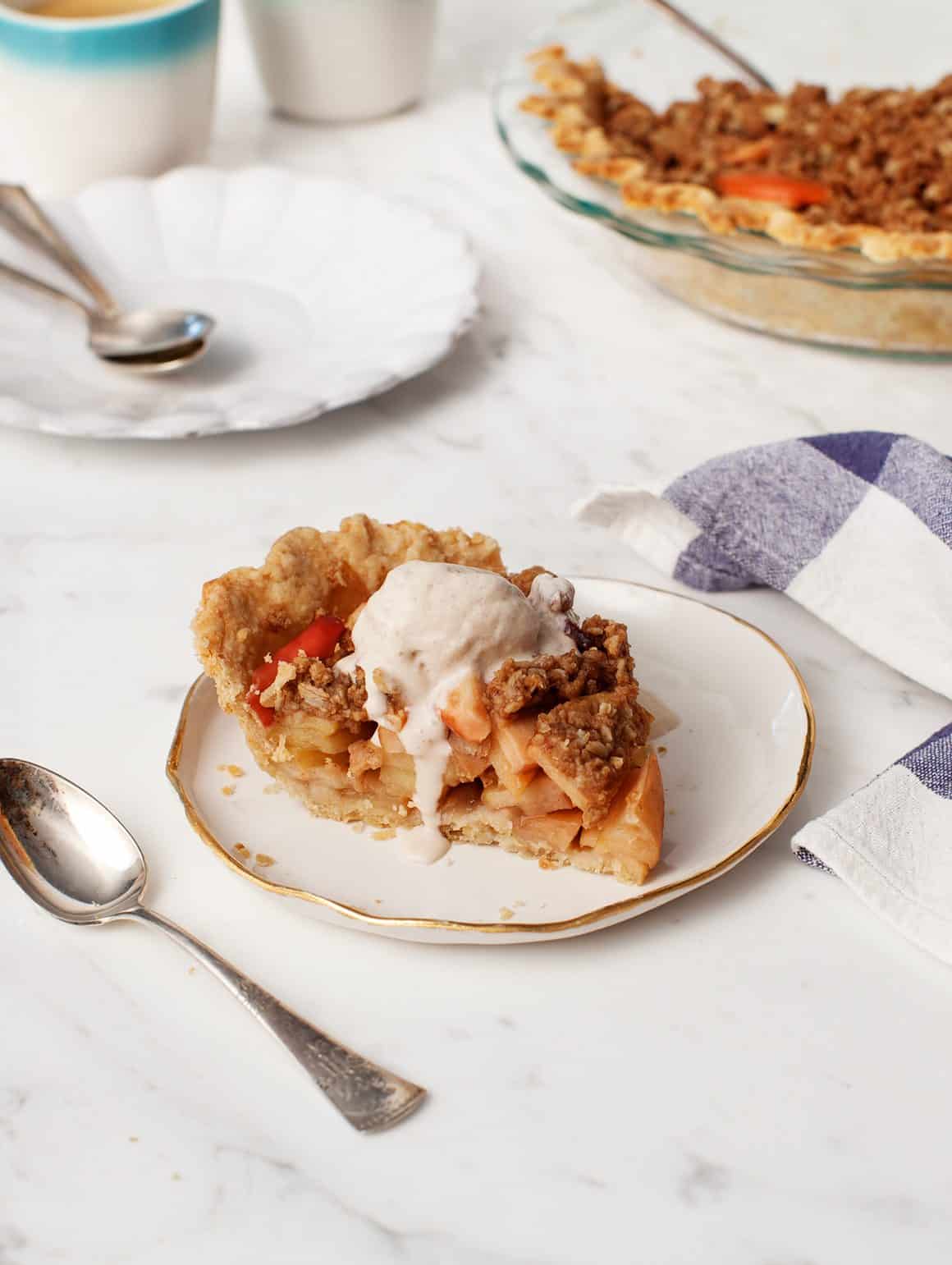 If you love this apple crumble pie recipe…

Then try a healthy apple crisp, cinnamon apple crumble, or apple muffins next!

Print
Prep time
1 hour 30 mins
Cook time
45 mins
Total time
2 hours 15 mins
This delicious apple crumble pie happens to be vegan, so it's a great dietary-restriction-friendly choice to bring to gatherings. The spiced brown sugar topping pairs perfectly with the apples to give this pie classic fall flavors.
Author: Jeanine Donofrio
Recipe type: Dessert
Cuisine: American
Serves: 8-10
Ingredients
For the crust:
For the crumble topping:
For the filling:
Instructions
Notes
*If your coconut oil is melted, pop it in the fridge and wait for it to firm up (usually 10 to 15 minutes).

Crust recipe is adapted from Vegan for Everybody by America's Test Kitchen.
3.4.3177
Special thanks to Wolf for partnering on this post!

We love to eat, travel, cook, and eat some more! We create & photograph vegetarian recipes from our home in Chicago, while our shiba pups eat the kale stems that fall on the kitchen floor.